First the reality.  Nobody knows what the market is going to do.  Yes, I am aware that there are roughly a bazillion people out there “prognosticating” (myself included) about the stock market.  And yes, if one makes enough “predictions”, the law of averages dictates that one will be correct a certain percentage of the time.

Still, the market does offer clues.  Sometimes those clues turn out to be false leads.  But sometimes they do offer important information.  For example, Figure 1 displays four major market indexes.  As you can see, in the Aug-Sep-Oct time frame all four of these averages “broke out” to new all-time highs (i.e., The Good News) and then broke back down below the previous resistance line drawn on each chart (i.e., The Bad News). 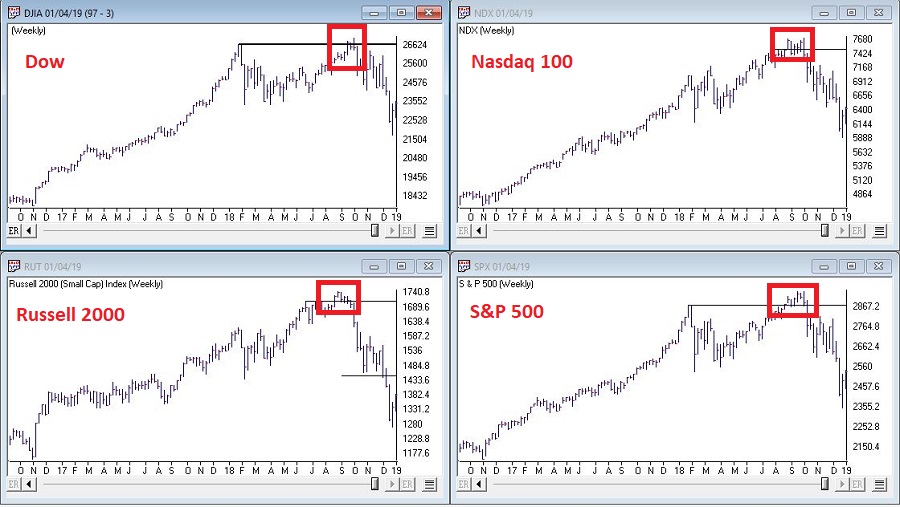 False breakouts happen all the time.  And the reality here is that sometimes they mean something and sometimes they don’t.  But when all four major average do the same thing, a warning sign has been issued to those who are interested in seeing it.  That’s why it can be useful to seek “confirmation”.  For my purposes I look to what I refer to as my 4 “bellwethers”, which are: 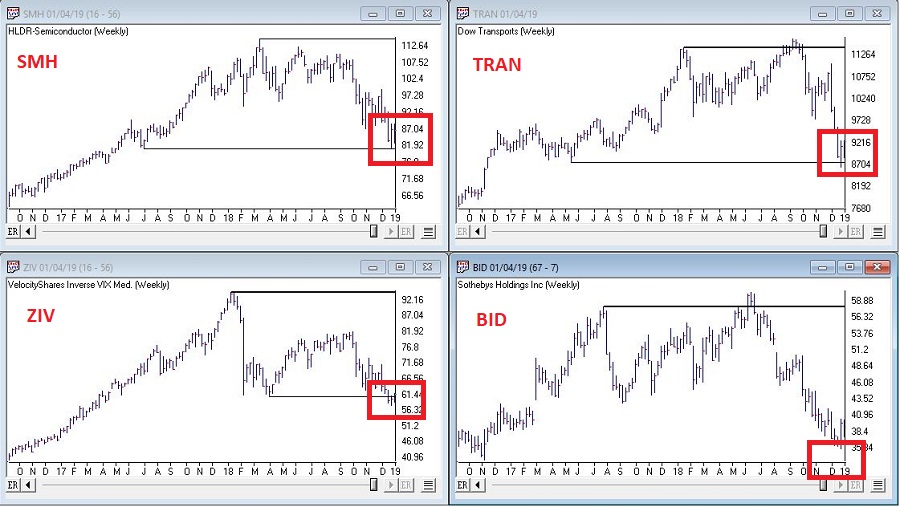 While the major indexes were testing new highs in Aug/Sep and then breaking down in October:

BID – Broke to a new high in Jun/Jul, then failed badly.

In a nutshell, the failed major index breakouts were accompanied by absolutely no positive signs from the 4 bellwethers. So, the warning signs were there if one wished to see them.

So where are the bellwethers now?  Another close look at Figure 2 reveals that:

*There is a chance that 2019 could be surprisingly bullish, and shell-shocked investors should not stick their heads in the sand to the possibility.

At the same time:

*Based solely on trend-following indicators ALL of the major market indexes are technically in confirmed bear markets.  As a result, there is absolutely nothing wrong with having some portion of one’s capital in defensive positions at the moment (30% cash or short-term bonds?).

*Keep a close eye on January performance.  A bullish January would be a positive sign just as a negative January could – in this case – signal a continued market decline.

*Keep a close eye on the 4 Bellwethers relative to their respective support levels.

*Down January + Bellwether breaking down below support = BAD

Those are all the “clues” I can offer at the moment.

Disclaimer:  The data presented herein were obtained from various third-party sources.  While I believe the data to be reliable, no representation is made as to, and no responsibility, warranty or liability is accepted for the accuracy or completeness of such information.  The information, opinions and ideas expressed herein are for informational and educational purposes only and do not constitute and should not be construed as investment advice, an advertisement or offering of investment advisory services, or an offer to sell or a solicitation to buy any security.